The sisters value and quality

All 367 Technology 189 Business 85 Project Management 17 News 03
Cezary Dąbrowski
I’m in role of IT Operations Lead in Objectivity. I’ve started as an engineer in support, next I became Team Leader and I’ve coordinated work of 2nd and 3rd line for one service. Now I’m a Chapter Leader and coordinate work of 4 support teams and all support lines. My main professional aim is to create support awareness and built high quality and high value for our customers. To do so I’m adopting ITIL practices to day-to-day activities.
See all Cezary's posts 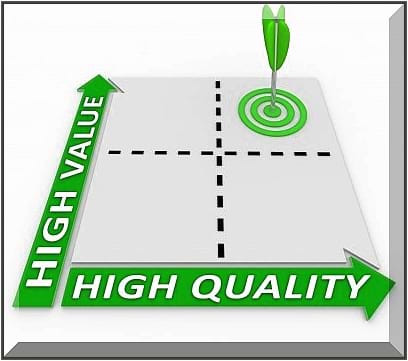 Today let me shed a little more light on two aspects of work in support that are very important to me, namely the value and quality. Both of these features constitute a certain benchmark to me that adds the meaning to the effort of all people involved in the work for the customer's system.  Both of them are also inextricably linked, and it’s important that each party, the customer or provider, understands them in the same way.

In order to explain the sense of value, let’s take the easiest, not to say the most stupid example, and consider a person, who wants to hammer in a nail, but has no tools to do it. If you want to help such a person, you may offer a screwdriver. All in all, why not? Once, when someone screwed a bolt, the screwdriver was a great help and this person was very grateful and happy. The question is, whether also in this case our screwdriver will add a measurable VALUE? The answer is trivial of course, it will not give such a value. What you need is a hammer ... BUT even now the answer is imprecise. Let’s imagine that we give that person an auction hammer (or a gavel, as you wish), and doing so, do we meet the expectations of someone, who wants to hammer in a nail? Again, probably not. That’s why it’s so important to clarify the requirements. And coming back to IT, development and support supplement each other, because just as precise gathering of requirements is a basis of a good project, determination of value, which is to be provided by the service, is the basis of good support.

Now, when we already know what the value is for the customer and we want to make a bespoke service, let’s consider how to ensure quality. If you want to build a long-term relationship with the customer (and anyone who offers support should focus on this type of relationship) you need to design such a service that is not a mere fulfilment of contractual assumptions in 100%. It should exceed customer expectations. I imagine that at this point some of you may ask “But why?”. Because our thinking should go forward, the service should be capable of developing, expanding and hence, we should be entrusted with further systems to support without the need to totally redesign the service. To do this, in addition to good equipment, premises and infrastructure that make the entire background, we need these “brave soldiers”, who will be able to face the challenges posed by the soft and its users every day.

And thus, as it’s best to fight the battle with the elite military troops, not the students that finished civil defence training, if we aim high and top quality is our objective, we need to have the best people. There’s a commonly held opinion on the market saying that if someone hasn’t proven themselves in development or hasn’t been good enough to be employed there, should be able to manage in support. You couldn’t be more wrong! To work in this field of IT you need to have exceptional skills, because working “at the front line” differs from working in development. In the project, the developers mostly deal with one task, and after finishing it, they deal with another one, in addition, the project is carried out from the initial date – the start of the project – to project end and closure. These are usually relatively short timeframes.  Support is continuity, so we often say about continuity of the service. Roughly speaking, the start of support designates launch of the system to production, and the end often means expiry of the technology or replacement of the system by a newer version, and usually these are years. It also differs from the project, as it requires frequent switches between tasks, work at various times (sometimes at night) and ... sacrifice. Therefore, to work in support, in addition to knowledge – you need predisposition. The essential characteristics of a support specialist are for example analytical thinking, creativity, communication or .... empathy. Engineers and analysts in such teams need to understand that when they get an alert email saying that functionality has been turned off, this is not a problem with the server, it does not mean that the network has crashed, this is not a data error. It’s the user in need, who cannot work and use the tool, which was supposed to help. And when you react to a service request, you don't help the server, network or database, you help a person who is counting on you, because support is, above all, helping other people...

it support it security development culture
Cezary Dąbrowski
I’m in role of IT Operations Lead in Objectivity. I’ve started as an engineer in support, next I became Team Leader and I’ve coordinated work of 2nd and 3rd line for one service. Now I’m a Chapter Leader and coordinate work of 4 support teams and all support lines. My main professional aim is to create support awareness and built high quality and high value for our customers. To do so I’m adopting ITIL practices to day-to-day activities.
See all Cezary's posts