The evolution of a team – part 2

All 342 Technology 174 Business 77 Project Management 17
Paweł Słowikowski
Scrum Master by trade, Trainer by choice, Human Being from birth. Interested in agile methodologies and leaning towards Lean. More than 8 years of experience in a multi-cultural IT projects, including 5 years as a Scrum Master and 1 year as an Agile Coach. Over 300 hours as trainer of Agile methodologies and soft-skills. Currently supporting front-line agile projects in Objectivity.
See all Paweł's posts

It’s nice to meet you. Let’s be friends

“I don’t like that man. I must get to know him better.” – Abraham Lincoln

I must refer back to my example in my previous blog post – The evolution of a team Part 1. You gather a group of people to perform a task, a project and/or a world-changing activity. We’ve all been there – either as the leader that starts it all off, as a servant-leader who is told to ‘make a performing team out of those lazy bastards nice people’ or as a team member in a totally new environment.

This initial stage, when a group (not yet a team) meets and starts to work together has received many names in literature: some call it the ‘Orientation’ phase [Runkel, Lawrence, Oldfield, Rider, Clark, Stages of group development: An empirical test of Tuckman’s hypothesis] or ‘Orientation and Dependency’ [Jedliński, Trening Interpersonalny]. Others write about ‘Dependency and Inclusion’ [Wheelan, Davidson, Tilin, Group development across time: Reality or illusion? Small Group Research]. The most widely recognised term might be ‘Forming’ [Tuckman, Developmental sequence in small groups]. Personally, I call it the ‘Sniffing each other’ phase.

This is the very start of the journey. It is during this phase that people get to know each other, they test the boundaries around them and anxiously await the outcome of this whole endeavour. This is also a time where a clear direction is needed – and it is a leader that is needed to provide it. You, as a leader will be responsible (usually) for setting the boundaries and framework for this initial phase. This is because people need to know what they should and shouldn’t do and how to start the actual work. Their safety is their (and your!) main concern. Remember, that people in the group will have different experience, skills and attitude. You should get to know them well and as fast as you can. Individual ‘small-talk’ helps here a lot – but only if you are genuinely interested in what they have to say! Start by finding out what things put a smile on their faces and a glow in their eyes.

Depending on what kinds of people you have in the group, you might want to consider different approaches on how to set these boundaries. I worked once with an already established team that experienced some changes (the rotation of one employee and a change of a Scrum Master – that was me.) Due to these changes and from what seemed to be a real lack of the Storming/conflict phase (from observation and discussion with team members), I diagnosed the team to be still in the Forming phase. However, some internal rules were already present and the boundaries were already set, so the team also had some hints of being in the Norming phase. My first steps were to build trust and relationship with the team, especially with the informal leader (previously acting as a Scrum Master). Then I followed up with observation, reflection, implemented some corrections to the processes and added some short activities to help the team to ‘open up’ (more on that in the next part of the article, where we’ll touch on the Storming phase).

A totally different experience for me was when I took care of a team that was composed exclusively of new people, fresh out of College. Most of them had little or no work experience. In that situation, I had to assume a more direct role as a leader to provide a clear set of work rules and organisation boundaries. There was more instruction, training and direction from my side than with the team in my previous example. On one hand it was easier for me to build a strong relationship with this team (which lead to mutual trust) and to lead them through changes. On the other hand it was really time-consuming to set up so many (sometimes small) things by myself.

I have mentioned the boundaries that you, the leader need to set or present to the group (that will later form into a team). I have participated recently in many discussions on the nature of self-organisation and the setting of clear boundaries is always mentioned as a prerequisite. These boundaries will ALWAYS depend on the organisation, values, project, customers and other factors. Below are examples of the boundaries and frameworks in use in one of my project teams:

The basic symptoms of this phase are:

So what are the dos and don’ts if you are a leader in this early stages of your group’s development? 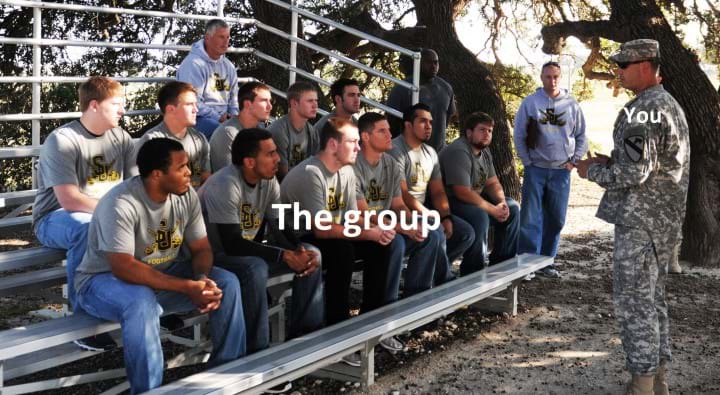