The evolution of a team - part 1

All 367 Technology 189 Business 85 Project Management 17 News 03
Paweł Słowikowski
Scrum Master by trade, Trainer by choice, Human Being from birth. Interested in agile methodologies and leaning towards Lean. More than 8 years of experience in a multi-cultural IT projects, including 5 years as a Scrum Master and 1 year as an Agile Coach. Over 300 hours as trainer of Agile methodologies and soft-skills. Currently supporting front-line agile projects in Objectivity.
See all Paweł's posts

I am writing this series of blog posts to help managers, leaders or a servant-leaders understand the situations (and reasons behind them) that they can face while working with a group of people – specifically those related to the stages of group development process. It will not be an easy-to-read, ‘silver bullet type’ series. However, you WILL find tips and tricks and my personal experience here. You will also find a lot of distilled knowledge from different sources (books, articles, scientific papers). Might be too much for you. Might be too little. Consider yourself warned.

Part I – The myth of a self-organizing team

Get a bunch of people, have them seated in a room, and label them as a team. Once we’ve done that, we’ll then prepare some tasks for them to perform, explain some vague goals to be achieved, and then watch the magic happen?

Self-organization! Empowerment! Commitment! Excitement! That, my friend, you WON’T get.

“But why?” you might ask. I’ve read so much about these great examples of how people just organize themselves around a common goal and get on with their workload with no supervision or micromanagement needed. Eventually, that may be true. However, what you might not have realised is that all those books and articles about self-organisation have a small asterisk in there somewhere. They all seem to have a word TEAM mentioned somewhere, usually next to the ‘self-organising’ part.

So what is a team exactly?

It is definitely not just a working group or co-acting group that “consists of people working in proximity to one another, but not depending on what the others do to complete their respective jobs”. [Kaltenecker and Hundermark, What Are Self-Organising Teams?] There are many definitions of a team but I like this one the most:

“A team becomes more than just a collection of people when a strong sense of mutual commitment creates synergy, thus generating performance greater than the sum of the performance of its individual members.” [WIKIPEDIA – duh!]

Many of the sources also mention things such as a common goal (or even a ‘compelling mission’), clear boundaries, stability, trust, and diversity are all necessary factors in describing and creating an effective team.

Now you have heard about those self-organising TEAMS, and you want to get there with your team. You really, REALLY want to reach this promised land of creativity, commitment, and amazing performance. Before we start though, I want you to be AB-SO-LU-TE-LY sure that you want to INVEST in a team. It will take time, money, sweat, tears, and a lot of nerve to pull it off. Not every project or task needs to be executed by a team. If you want a solution for a short-term goal, a ‘quick fix’ or you have a clear plan on what to do – it is better to create a (work) group with a strong leader. If you want a long-lasting performance that will, in time, exceed that of a (work) group – then you might invest in building teams. There is room for both cases in an organisation. Teams are great when you need to, for example, design a car. Groups are excellent to build thousands of them and ship them to customers. [Rozumenko, Do you really need the Team?] 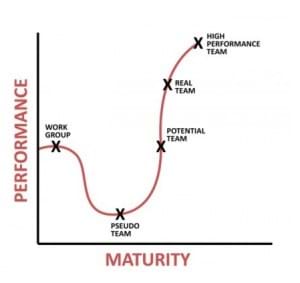 So, if you are 100% sure that what you need is a self-organizing team, then let us proceed. I will tell you a bit about what lies ahead.

In the next posts I will walk you through different stages of team evolution (or group development as some call it). I will base my rambling conclusions on personal experience and various research conducted over past 40 years. During that time, many group development models were published (but few were actually empirically tested). Looking back on my work with groups and teams, I tend to lean towards the idea that there are 4 (or 5) distinct stages of group development – a theory originally synthesized by Bruce Tuckman [Tuckman, Developmental sequence in small groups] from around fifty group studies of group development and then extended and empirically tested by S. A. Wheelan [Wheelan, Davidson and Tilin, Group development across time: Reality or illusion? Small Group Research]. Those are so-called ‘Life cycle models’ (extension of linear models) that describe a number of stages that the group (and eventually – team) goes through in a ‘step-by-step’ fashion [Van de Ven and Poole, Explaining Development and Change in Organizations]. 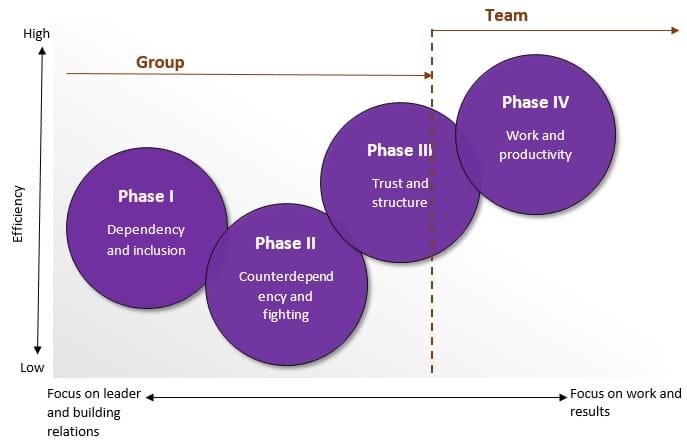 The longer the group ‘lives’, the more qualities from phase III and IV (GDQ 3, GDQ 4) are noticed by the group members and less of those related to phase I and II (GDQ 1, GDQ 2). This is represented by the average score in each stage. You can see also that the perceived efficiency and productivity mirrors the graph above, with a dip in both areas during the ‘GDQ2’ stage – Counter-dependency and fighting (‘Storming’).

However, I also tend to agree with theories that include repeating (recurring) cycles of those stages of development [Gibbard, Hartman and Mann, Analysis of groups] and that the teams can regress to previous stages or even have team members individually ‘stuck’ in a different stage of group development than the rest of the group.

I have observed that there seems to be a constant struggle within team members between the need to belong to a group and the need to retain an autonomous individually [Fuhriman and Burlingame, Handbook of Group Psychotherapy: An Empirical and Clinical Synthesis]. This is somehow encompassed by the observation (and realisation) of different roles that emerge in the team.

Whoa, that is way too much information!
Fear not, for in the next parts I will also give you some practical hints and tips on how to recognize various stages, and what to do when you find yourself in one of them.

Important note – throughout the next parts of this essay you will learn about different names used by different scientists in regards to the phases/stages of team development. Although I tend to use more of Wheelan or Jedliński nomenclature, I will use the names from the Tuckman’s model as it seems to be the most widely recognized: Forming, Storming, Norming and Performing. I will also use the terms ‘group’ and ‘team’ interchangeably, as well as ‘stage’ and ‘phase’ (meaning stage/phase of group/team development).