How to create a project team by means of artificial intelligence?

The authors of the post made an attempt to address the following question by participating in hackathon IDEAapp_2018, organised by Objectivity, and aimed at creating an application for team building, which was part of the initiative. Three experts in Low-Code platform, a Data Scientist and a project management office representative took part in the event. The description of their results can be found below.

The application aimed at supporting that part of a process related to building a team based on the necessary technologies used for product development, as well as the availability of employees that could potentially join a project team. In addition, the above criteria were also supported by strengths resulting from StrengthsFinder 2.0. test. Selecting team members based on their technical skills and their availability does not raise any objections. Our approach focuses on aspects related to subsidiary criteria, i.e. individual strengths.

Apart from technology and availability, we chose StrengthsFinder 2.0 test as our subsidiary criteria – we generated data reflecting the current results made available by Gallup’s CliftonStrengths. Our choice of StrengthsFinder 2.0 resulted from the fact that our organisation uses this tool on a daily basis. Each employee has an opportunity to take part in the test right after being hired. Next, the results are analysed together with an HR Business Partner. StrengthsFinder 2.0 is an essential tool by project teams during workshops. The aim of the workshops is to build a team and stress the importance of strengths complementing one another.

The results of StrengthsFinder 2.0 provide a comprehensive description of participants’ strengths, and present challenges that an individual with particular strengths may come across. The description also mentions aspects that we need to pay attention to while working with such a person. SF 2.0 test divides employees’ strengths into the so-called 34 talents and indicates 5 of them which are predominant (however, the very meaning of the word ‘’talent’’ is slightly different to that of the word ‘’strengths’’ due to fact that one is aware of its use and is constantly working on it. Therefore, these words will be used interchangeably as it is a conscious simplification for editorial purposes). From the application’s perspective, the most important aspect is that for the majority of talents we can distinguish the so-called resonating talents, i.e. those which are mutually complementary. What is also relevant is that these 34 talents may be divided into 4 domains:

Our aim was to take advantage of the test at the very moment of creating a team, and not as it was previously done – after its creation.

What makes a good team? Is there any measure that can be used to evaluate the team’s value and to compare it with other possible personal configurations? Depending on tasks and the nature of work, the team’s value can be measured in various ways, which are often defined by business requirements such as: delivery time, quality, client’s satisfaction. However, there is one universal measure that defines team’s strength – synergy.

Synergy determines the ability of a team to create an added value, which means that the final effect of the team’s work is bigger than the very sum of an individual’s work effect.

Synergy is, however, a post-factum measure – it can be applied only after the work is done by a team. What happens in the case of a project team being built from scratch? Here, we come across a problem – the so-called cold start – when we are not given the team’s historical data, which we could base our future work on. When we need to wait days or weeks to observe the effect, the uncertainty, whether the team is able to deliver the product on time and according to given requirements, seems to be quite significant.

In the case of our application, technology and availability were the primary deciding factor, and strengths were to help us appoint people who had resonating talents. Consequently, we tried to find possibly the best team with the biggest number of resonating talents. 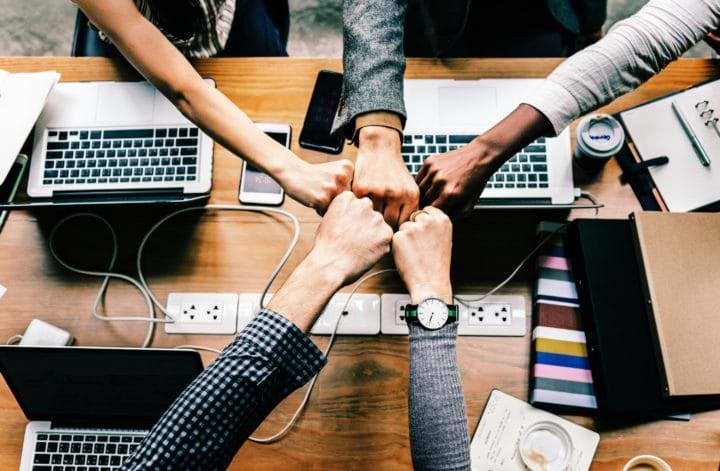 In the era of artificial intelligence developing rapidly, ethics seems to be of higher importance since it affects the way of using algorithms and machine learning. There are several examples of models that learnt based on inappropriate (unbalanced) data. Such models came up with solutions that discriminated against certain social groups. Ethical issues were also taken into consideration in the context of the very StrangthsFinder 2.0 test, which clearly shows that it is not really a tool for employee recruitment. Keeping that in mind, our application aimed at basing on the results of the test carried out after a given employee was hired.

As it has already been mentioned, the main aim of the application was to recommend a team based on technical skills and employees’ availability. Additionally, the idea was to indicate talents that would be mutually complementary in a given team. Each time, it was supposed to be a recommendation of team configuration, based on which a person managing the resources could make choices. We aimed at process optimization and decision-making support – we did not want its complete automation.

In the universe everything has its cause, and the same applies to team’s synergy. There is research on synergetic processes (where synergy effect is taking place) in living organisms, which indicates a positive correlation between entropy of individual features and synergy. In other words, the bigger the diversity of species, the higher the synergy. Therefore, measuring entropy while building a team would allow us to maximise synergy and consequently, it would decrease the level of uncertainty related to the results of team work.

Entropy measures diversity both in physical systems (thermodynamics, static mechanics and quantum mechanics) as well as information. Thus, it seems ideal for describing the complexity of a team and given individuals.

What talents should be taken into consideration while building a team? How to determine or establish those which will be suitable to join a team?

The second problem is that of talent similarity. As in the case of resonating features, some strengths bear strong resemblance to the others. The third problem is the number of relevant features out of all the possible ones. Algorithm is pure maths so everything needs to come down to numbers. If we mark the occurrence of each of 34 features as 1, or 0 in the case of the lack of a feature, we will get a 34-dimensional vector, where only 5 positions will have 1 value, and the rest 29 positions will be given 0, i.e. rare vector. Obviously, calculations based on such vectors are technically possible, however in this case, there is no guarantee of the correct results.

The solution would be to use information that is more generic than specific talents, i.e. to apply the already mentioned domain division. Thanks to that, an individual is given a 4-dimensional vector instead of 34-dimensional one, with possible values ranging from 0 to 5 in each dimension, but with the sum not exceeding 5, which is exactly what we are given by a basic SF result that indicates predominant talents. Consequently, the diversity is preserved at the domain level, and not particular talents. Moreover, providing the biggest number of representations of given domains within a team will result in synergy. At the same time, the application allows to recommend a team according to the chosen technologies and will ensure enough space to carry out a project covering the biggest number of domains that group talents. In addition, ensuring the occurrence of all the domains leads to diversity of talents within a team. In this case, it increases the number of talents that interact with one another since the distribution of different domains favours the resonating effect.

IDEAapp_ is one day devoted to coming up with an idea, two days for developing the application and one day for its presentation. The latest edition of this hackathon can be considered as completed. Nevertheless, it does not mean that the work on application is over. At the very moment, the product is being successfully developed by Rapid Development Practice and is presented as an example of Mendix platform use. How do you make sure your services stay relevant and competitive? You specialise and reinvent. But how you increase your reach at the same time? You make use...