This was a regular morning on a regular Wednesday. I was heading to my lab (which is really a standard office that I share with one very talkative guy… a “lab” sounds more professional, though), when I heard a heart-breaking cry from one of the rooms. When I looked inside I saw a terrible scene. One of my colleagues was shouting at his whiteboard, cursing it, its manufacturer, the markers, their manufacturers, and their entire families to the third generation. While doing this, he was furiously trying to wipe the whiteboard, without achieving any greater effect than stains on his shirt and hands.I realised that I had become a witness of the greatest drama that can happen in the office during daylight hours – permanent marker on a whiteboard.

“The horror,” Kurtz said at the end of Heart of darkness, “the horror”. I wonder what would he say if he got delivered a whiteboard in the jungle with a set of permanent markers. This would be the true horror. I really cannot understand why they keep producing them. A whiteboard marker can be used both on a whiteboard and on paper. The permanent one you can use on paper but it will screw you when you use it on a whiteboard. If you want to make the world a little better place, I urge you to join me in my ITAATPMYF quest (Immediately Throw Away All The Permanent Markers You Find). Ufff…

Coming back to the story. When I saw the poor guy I expressed my condolences and invited him to join the ITAATPMYF quest. To my surprise, he said that he was not using the permanent marker, but the whiteboard one. I had to check myself and indeed, only a part of the paint was vanishing while wiping. It’s true, the eraser was not a premium one, but still it should have worked! What the hell?

I realised that this was exactly the kind of case for the Operations Research department. I put on my white coat and focused on this as a matter of priority. After short interrogation it was revealed that the whiteboard drawing was made two weeks ago, with a regular black Pentel marker. I started to wander around the office in search of old drawings. Whenever I spotted one, I was erasing it immediately (some people were trying to stop me but they were clearly underestimating the power of the determined scientist). Some drawings were easy to erase, others didn’t come off at all. It was difficult to draw any conclusions as people, instead of providing useful facts about which markers were used and the age of the drawings, were usually babbling something about their lost whiteboard notes. It was clear that I need to make an independent experiment.

I gathered all the kinds of whiteboard markers that were available in our company. I assumed that the colour of a marker does not make any difference (which should be verified in a separate research). I chos a low-end eraser. I prepared some typical whiteboard space, far from windows, air conditioners etc. The experiment started with the following board: 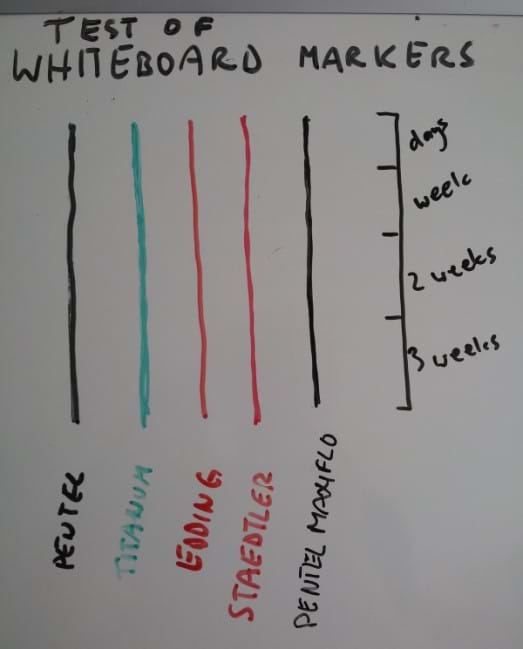 I drew 5 lines, each using a different kind of marker: Pentel, Titanum, Edding, Staedtler and Pentel Maxiflo. Then I started to erase a part of each line after certain periods of time: two days, 1 week, 2 weeks and finally 3 weeks. I was erasing using a moderate strength of action, wiping only once.

In the beginning, all the lines were easy to erase. All the markers came out completely after two days. The same occurred after one week, maybe with a small shade of ink left for Pentel and Titanum. After two weeks, it started to be a bit more interesting: 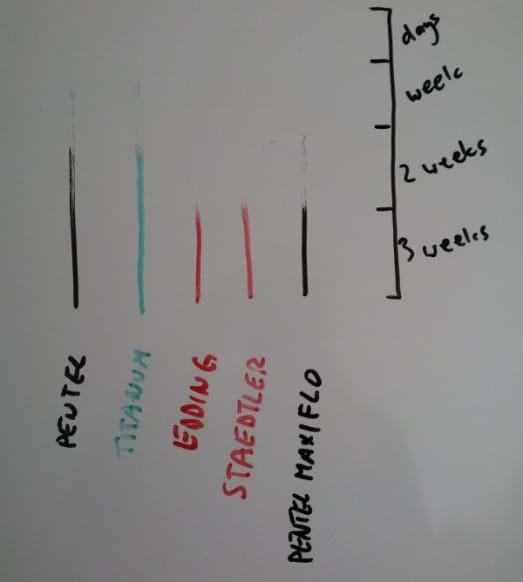 As you can see, despite wiping, both the Pentel and Titanum lines stayed on the whiteboard (with the Pentel line a bit paler). You can also see a light shade of Pentel Maxiflo line. Edding and Staedtler lines were fully removed. And here you can see the final result: 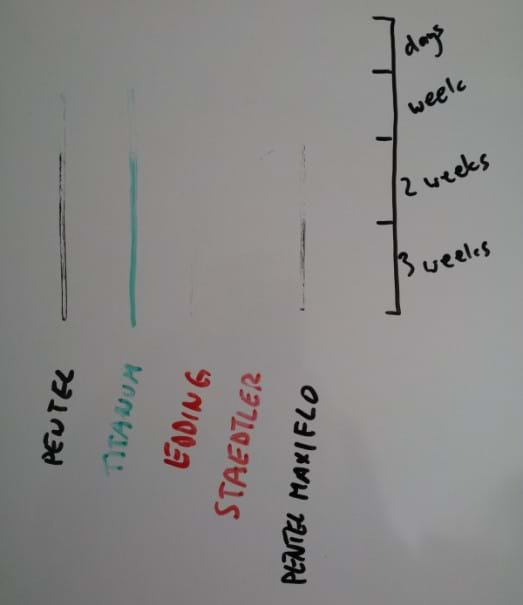 After three weeks Pentel Maxiflo was also difficult to wipe. Edding and Steadtler performed the best, with a small advantage going to Steadtler as Edding has left a minor trace of the last piece of line.

As I am expecting to be sued by the marker manufacturers in the next 24 hours, I need to admit that the markers are not the only factor in the experiment. It could be that the results are valid only for my particular whiteboard or my particular eraser. The colour impact would also have to be considered. However, as I have chosen the most common board and eraser in my company, my conclusion is that using red Staedtler markers would save us from quite a few office dramas in the future.