Services often collaborate with each other when handling requests. This is the case especially for microservices which are distributed in nature. When one service synchronously invokes another (an external service such as payment APIs, warehouse automation, etc.) there’s always the possibility that the other service will be unavailable or under heavy load. It’s common to use the retry pattern for unsuccessful calls, but it can be dangerous for the system. It will try to call the third-party service again and again using resources such as threads while waiting for the response. As a result, this slows down your system and might lead to resource exhaustion, making the calling service unable to handle other requests. The failure of one service can potentially cause a cascade to other services throughout the application.

The circuit breaker pattern prevents an application from performing operations that are likely to fail, doesn’t allow failures to cascade to other services and helps you create resilient systems. It acts as a proxy and monitors the number of recent failures, then uses this information to decide whether to allow the operation to proceed or return an exception immediately. In a nutshell, it works like an electrical circuit in a house: when it’s closed, the device works, when it’s broken (e.g., by a switch), the device stops working.

The circuit breaker can be implemented as a state machine with the following states: 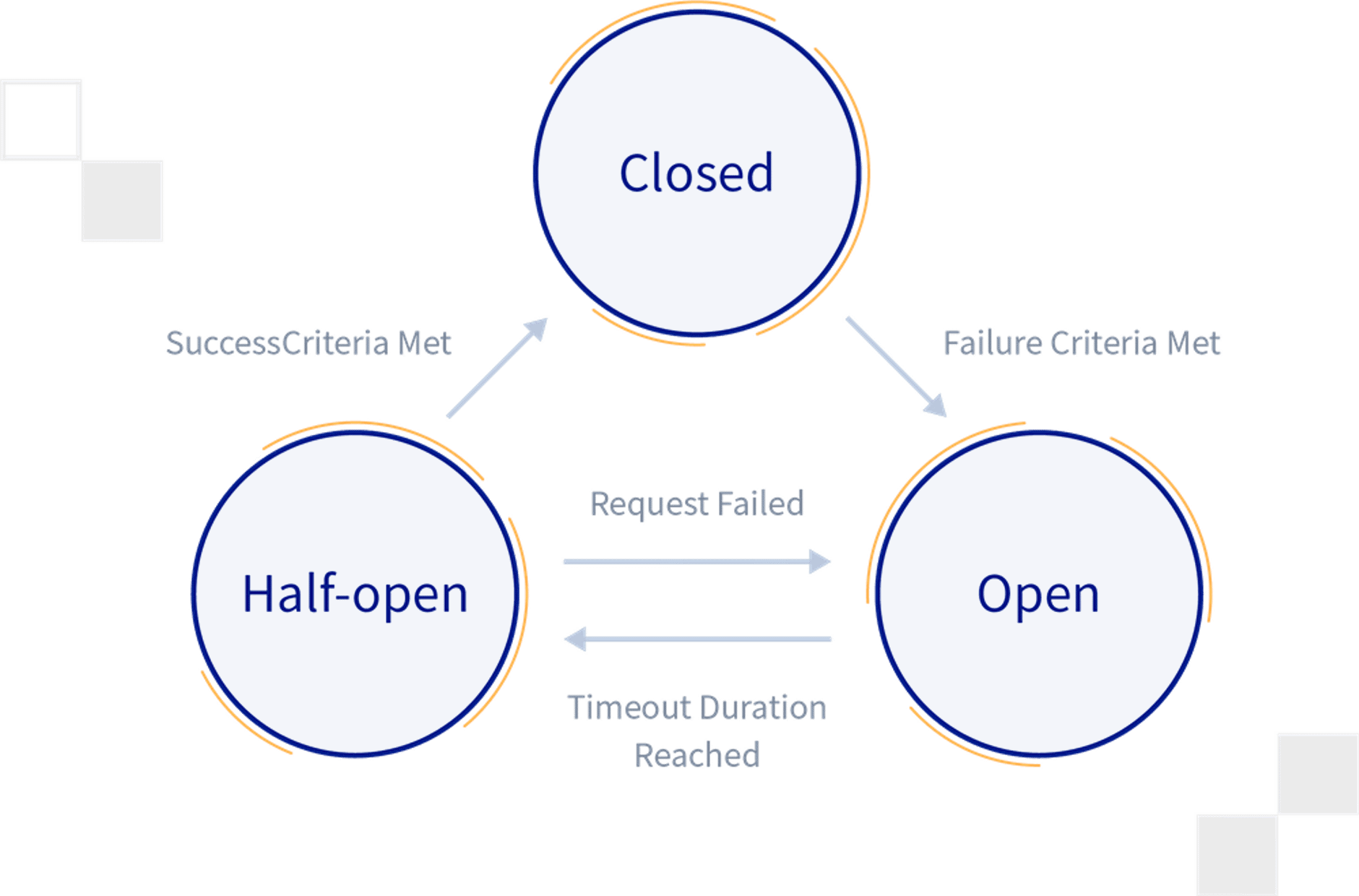 It’s quite complicated to implement a circuit breaker from scratch and it would take quite a while to do it correctly. There are many libraries that allow developers to use circuit breaker policies, for example Polly for .NET or Resilience4j for Java. Here is a simple example of using a circuit breaker pattern with the Polly library. It defines a circuit that opens after 3 exceptions and closes again after 1 minute. 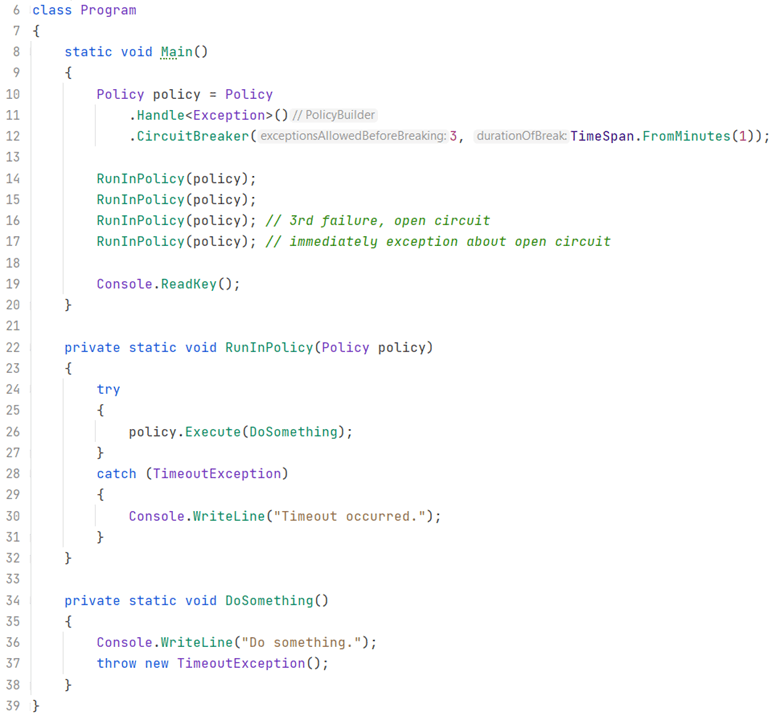 Application runs the method 4 times, the fourth time you get an open circuit exception: 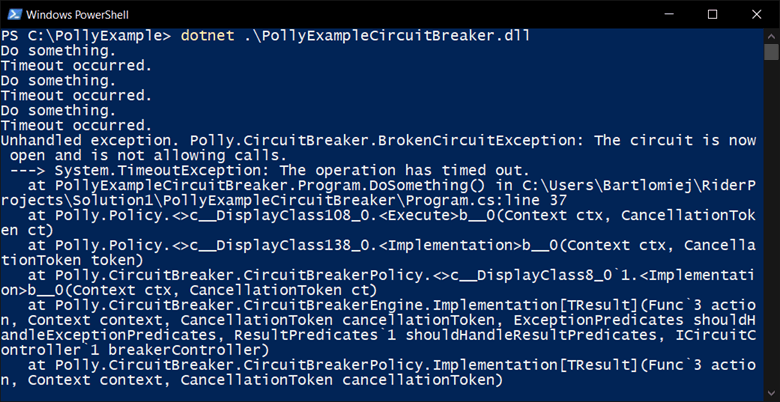 Simply wait one minute before the fourth call:

As expected, the circuit will be closed again, and the method will be executed for the fourth time:

The circuit breaker pattern is often used together with the retry pattern. Both patterns, properly implemented and configured, are powerful tools for application resilience policies. The circuit breaker pattern helps the system prevent sending unnecessary loads to a failed service. It’s potentially easy to implement using the existing libraries, however, it may be challenging to select the appropriate thresholds without creating false alarms or introducing excessive latency. There are ways to achieve this, for example by implementing a detailed logging mechanism where the circuit breaker pattern is used. By analysing the information in the logs, the thresholds can be adjusted to the correct level. Sometimes this operation requires long observation and multiple adjustments, but once you find the right thresholds, you can benefit from the implemented pattern and protect your application from an overload. 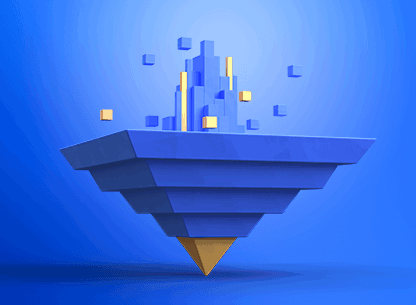 Technology 5 minute read
Objectivity on Aug 3, 2020
How to Successfully Adopt a BI Tool

The IT departments of many organisations have lately been flooded with requests for shiny new visualisation tools. The promise of dynamic, powerful dashboards, an accelerated time to market resulting from the use of a self-service platform, and independence from IT’s ‘longish’ delivery cycle all sound tempting. However, self-service Business Intelligence (BI) tools are not an antidote to all your data problems and there are still elements IT must take into consideration before buying licences. So, how best to prepare your organisation before rolling out new BI software?... 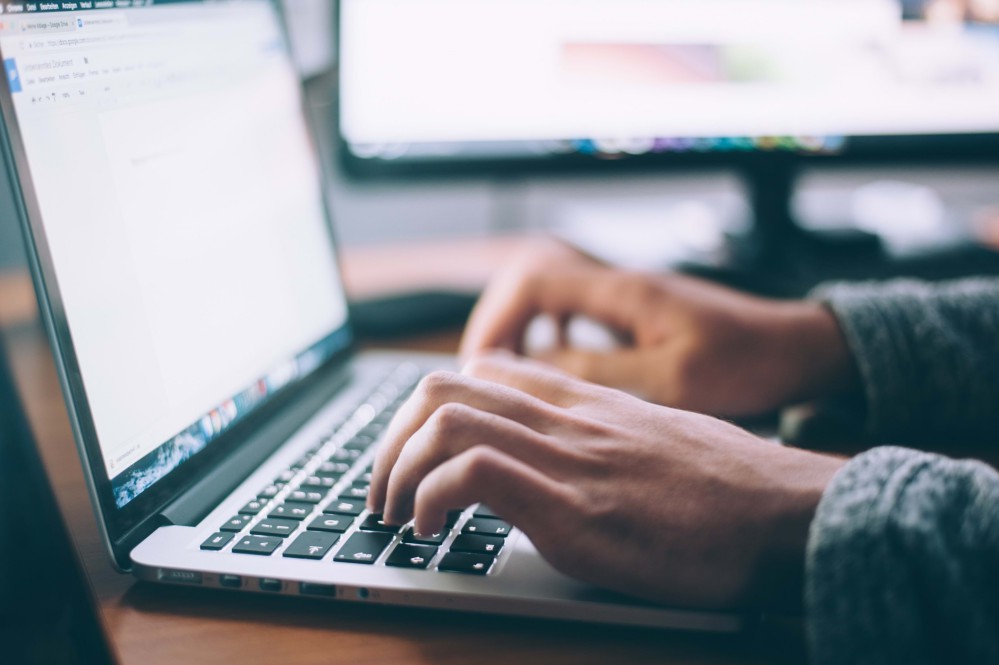 Kubernetes is a popular cluster and orchestrator for containerised applications. It is quite easy to create an application image, deploy it to the cluster and run as a container. But in many production scenarios a single application consists of many cooperating processes that should be executed as separate containers...

Technology 2 minute read
Grzegorz Sitkowski on Sep 9, 2015
When to use (and not to use) CQRS

From the perspective of architecture, Command Query Responsibility Segregation (CQRS in short)  is a pattern relying on separation of commands (performing actions) from queries (returning data)...